We will be publishing monthly newsletters this year. Our first newsletter can be downloaded here. 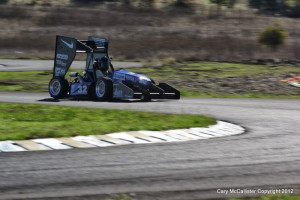 We made the front page of the Herald and News Newspaper! 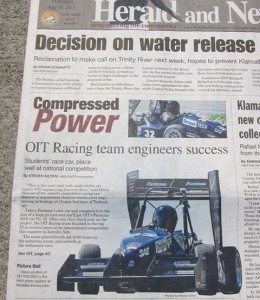 To read the whole article click here, and picture can be seen here.

Final results are out! 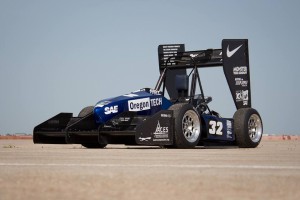 *Did Not Attempt Skidpad due to a blown engine that morning in practice. Effectively missed Accel as well – we got the engine in 15 minutes before Accel ended, leaving no time for practice runs or calibration.

Full results can be found here

Wednesday: We got to the premises early to try to get a good tech spot. However, due to a miscommunication we ended up not joining the tech line when we should have, meaning we did not make it into tech the first day. This was the first mistake of the weekend and put us onto our back foot for the whole event. We spent the day setting up camp and checking out the competition.

Thursday: We got into tech first thing and stayed there for nearly two hours. We got the most picky, by the rule book inspectors imaginable, and they sent us away with a list of stuff to fix. With Design, Presentation, and Cost also this day it meant we did not get through tech until late in the day. This combined with a small wing fix late in the day meant that we did not get any testing in this day either. However, we flew through the rest of tech without a hitch, including tilt test, noise, and brakes.

1: One of the head design judges, Steven Fox, told us that he was very impressed with our car during design. I had gone to a lecture put on by him up in Canada at the University of Victoria over winter break, at which point he told me he would be surprised if we made it to competition at all, given where we were with the car at the time. I reminded him of this and he could hardly believe it was the same team.

2: Finishing 7th in design. This is many many times better then we have ever finished before and is just another reminder that we did something right this year! Our student designed data acquisition system was one of the talking points for its innovative live update feature. Other notable systems included the powertrain, safety/ergonomics, and aero, as well as aesthetics/style, for which we very nearly got full points.

Friday: Morning practice quickly turned into a disaster. Instead of both drivers going out to get a quick feel for grip before Skidpad and Accel, our engine failed after just 2 minutes of driving. Once again miscommunication struck.  This was at about 9:30AM. By 10:00AM, after some quick testing to determine the problem we were tearing the engine out of the car. A quick store trip for Brake Clean and RTV, and the spare engine was in the car 2 hours later. 15 minutes later it was filled with oil, cooling system bled, and it fired up first try with about 10 minutes left in Accel. We got a driver out to do a run, but it was mainly a formality as we were hugely unprepared.

Autocross was next. This is the big event that tells which cars are fast and which are not, so we really wanted to do well here. We took our time, doing some practice runs and going over everything on the car to make sure we would have no problems. I went out to do my first run at about 4:00PM, after most of the fast cars had gone. First run and the car felt great: I immediately jumped to second place. Next run I dropped about a half second and jumped to first! This was despite getting up on two wheels in two spots on this run due to high winds and very high grip levels. It only lasted for about 15 minutes, but it ensured that every team there noticed us. Three other teams ended up besting my time, but 4th in Autocross is 12 spots better then we have ever been before, and it let us know that we had one of the most competitive cars there.  A strong couple runs by our second driver finished up the day on a high note.

Saturday: Endurance. The single event with the highest attrition rate. The event we did not finish last year when the car would not start after the driver change. We were apprehensive about this one to say the least. We knew we would have overheating issues but we had done everything possible to minimize them.

When I left the line at the start I realized we had worse problems – our clutch was slipping badly. Then 3 laps in the engine started overheating as predicted. These two problems played against each other and meant I had to nurse the car through the first stint of Endurance. At the driver change I told the other driver of the problems and sent him out, the car restarting with absolutely no problems. He took the car the rest of the way, displaying impressive restraint with the ailing car, and stepping up the pace only when the finish was within reach. A clean run with no cone penalties meant we finished 7th, ahead of several teams that were faster than us but hit cones or had other penalties of some sort. This marks the third year running that we have had zero penalties in endurance or autocross. In fact, this year we had zero penalties for the whole competition! Frustration at knowing we had a car with the potential to be top 3 in Endurance was mixed with the knowledge that we did everything we could, given the difficult circumstances.

Thoughts from the week: After looking over the competition on Wednesday, I came to the conclusion that we had one of the top few best looking cars there, with some of the cleanest carbon work and one of the best integrated aero packages. Now I realize I may be slightly biased…  but to me the only cars that looked comparable were ones that had already competed at Michigan earlier in the year. (Hmmmm….) This was reinforced by the judges reactions to our car, as well as the general reaction to our car by the other schools. Several teams asked me questions about team management, about how I coordinated the team that produced such a car. I saw team members from nearly every team come to check out our car, ask questions, and give us positive feedback. The announcer called our car “beautiful” at Autocross. It felt good to finally be one of the teams that everyone else noticed. I think the core team can be proud of the car that represented Oregon Tech this year! 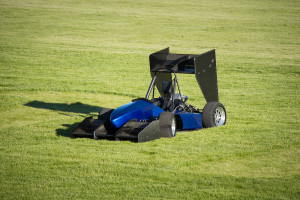 As the 2013 school year has come to an end, the team is making final touches to this year’s #32 car preparing for competition which is held at the Lincoln Airpark, in Lincoln Nebraska from June 19th – 22nd .

Throughout testing the car proved to be faster than its predecessor, thanks to the all-new aerodynamic package and lightweight design. The team is shooting for a top twenty (or better) overall finish and a top ten finish in dynamic events, such as: Acceleration, Autocross, Skid pad, and the premiere event, the Endurance race.

We would like to thank our 2013 sponsors, without their support we would not be able to compete in Nebraska.

Weekend autocross was a little underwhelming: the worlds bumpiest parking lot combined with dust and gravel made for some back breaking driving. We learned of a couple weak spots in our car though, so something positive was taken from it! We unofficially finished second to a very fast shifter kart, but were several seconds ahead of the next fastest car.

This is the first time we drove this years #32 car. Stay tuned for more videos and pictures.

We were featured in the Oregon SAE Connecting Rod April 2013 Newsletter!
Click here to read it. 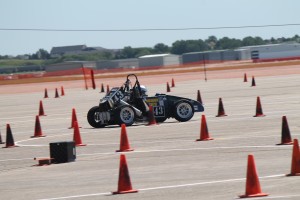 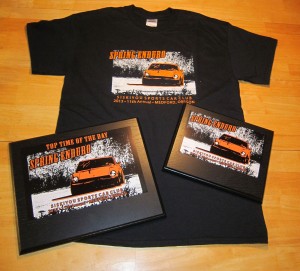 another great season opening event! We brought our ’11 and ’12 cars, and took home a class win in AM (only 1 second off the overall record at 4:24.xxx!!!), Top Time of the Day, and a cool shirt! This event is unique in autocross for it’s 5 consecutive lap, one attempt format, placing emphasis on consistency as well as speed. It is also notable in that they run the same configuration every year for this event, meaning you can get practice beforehand.
Despite rain Saturday, race day managed to stay dry, giving everyone an equal footing. The rain during Saturday practice made for some fun driving, lawn mowing, and lots of spinning, with the consensus being reached that powerful, short wheelbase cars on slicks are hard to drive in the wet!
Pictures can be found here, and this is the video of the whole 4 1/2 minute stint:

This April 6th and 7th, the Formula team is off to White City for a weekend of testing at the 11th Annual Spring Enduro race held at the Jackson County Sports Park. 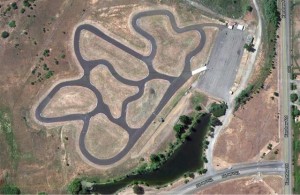 Top View of the Autocross Track in White City, OR. There can be multiple configurations of a track.

On Saturday there is open practice for everyone to get a feel for the track and to make the final adjustments for the race held on Sunday.

Event pictures and videos will be uploaded afterwards, but in the meantime you can watch the #50 2011 car put down some laps from last years enduro.